by Technopeasant
A 3D horror game inspired by the famous snowy hedge maze from The Shining (and also its homage in the game Blood) made for the April 2021 LibreJam.

"Just took a job here at this distant retreat to focus on my programming, but the wife seems to be acting a bit strangely.... better lie low out here." 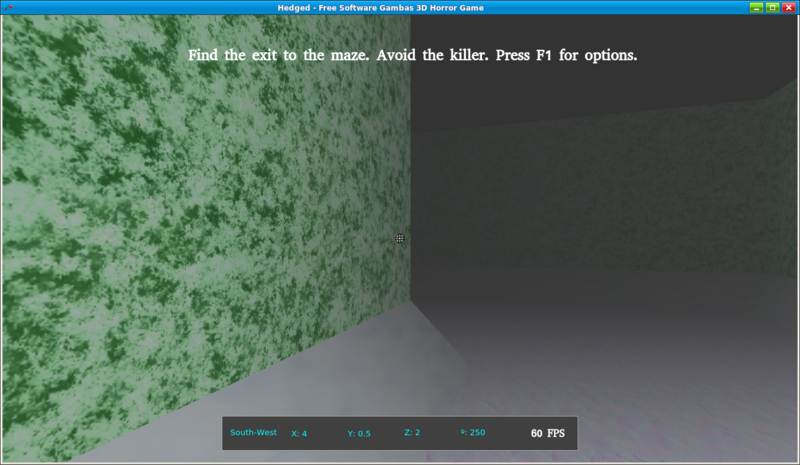 Having a four day long weekend this week certainly helped me produce something pretty nice this time.

by cogier
You have got the ambiance right. I managed to 'get out' twice and was killed once by that Lady in black. I think you need a lot more things to do to make the experience more interesting, perhaps collect items to be able to defeat the Lady. (With a BIG gun!

A 'Help' page would be useful, I was clicking the mouse for ages until I tried the arrow keys. I know it's obvious, but you have to cater for us oldies

The 'Option' message was not on the screen for very long, I missed it the first time. I suggest you leave it there until a player has selected to play. A menu at the beginning would solve this and also allow a place to send the player on completion of the game showing a message of congratulation

rather than just closing the program.

by Technopeasant
The UI should get a complete overhaul in the finished version with menus and help screens. This was just a mock-up made in less than six days after all.

I actually originally intended for the player to click to use the gate but could not get it to work, so walking into it was a compromise for time.

Certainly is bare bones right now, but at least as you say I got the ambience right to work from.

As for a Big Gun, that might detract from the atmosphere of this somewhat, but a FPS made on this tech is certainly planned down the road.