So you have written that new, must have program. Let us see it here.
Post Reply
12 posts

Here, what I hope, is a polished version of Sudoku. 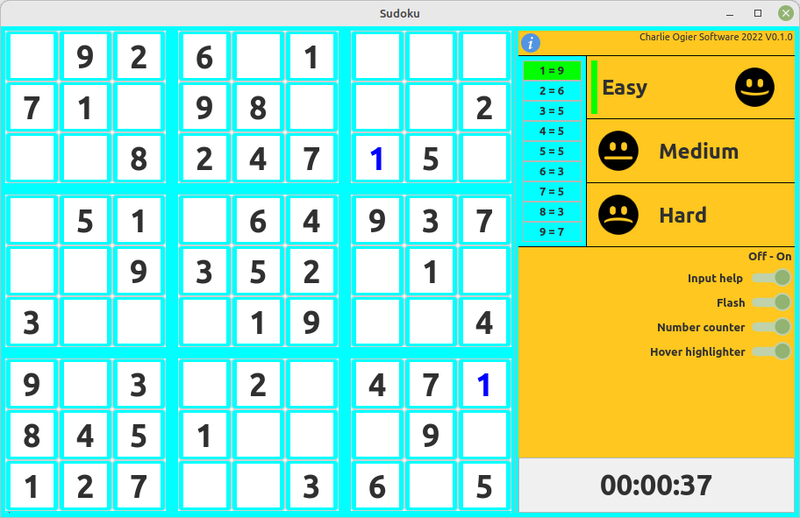 Nice interface. Even though it requires the keyboard for number entry, it is a very efficient entry system for this game. I really like the no clicking required action with the mouse. Just hover and enter the correct value. This works well whether you enter the values systematically (aka all the ones first, then twos, etc), or randomly as you find solutions. A lot of other Sudoku computer games work well for one type of entry, but not the other.

I also like the highlighting of the numbers when hovering over a value on the board or even on the number counter.

You also seemed to hit it right with the fonts and colours used on the game board. I find Gnome-Sudoku to be difficult to read compared to some others. I find yours is very easy on the eyes. A good choice of font size vs board size. I think the use of blue in rather then black for the boards also helps the numbers to stand out nicely.

The one annoyance I found with it was the need to click after an incorrect number before being able to hit the backspace button (or click in font of the number if using the delete key).

The features I would like to see in this game: But as it stands now, it looks like I've got a new Sudoku game to play on the computer.

Thank you very much for the detailed reply.


Nice interface. Even though it requires the keyboard for number entry

Can you point me to an example of a different input method?

A good choice of font size vs board size

Did you try expanding the program?

The one annoyance I found with it was the need to click after an incorrect number before being able to hit the backspace button (or click in font of the number if using the delete key).

Good point, I will look at this.

The features I would like to see in this game:
1/. A switch to turn off highlighting of all errors.
2/. A switch to highlight bad moves (aka two of the same digits on the same row)
3/. Being able to write notes
4/. Stats (fastest time, longest time, average time, number games played)

Thanks again for the input, it's a great help.

cogier wrote: ↑
Monday 31st January 2022 3:16pm
Can you point me to an example of a different input method? 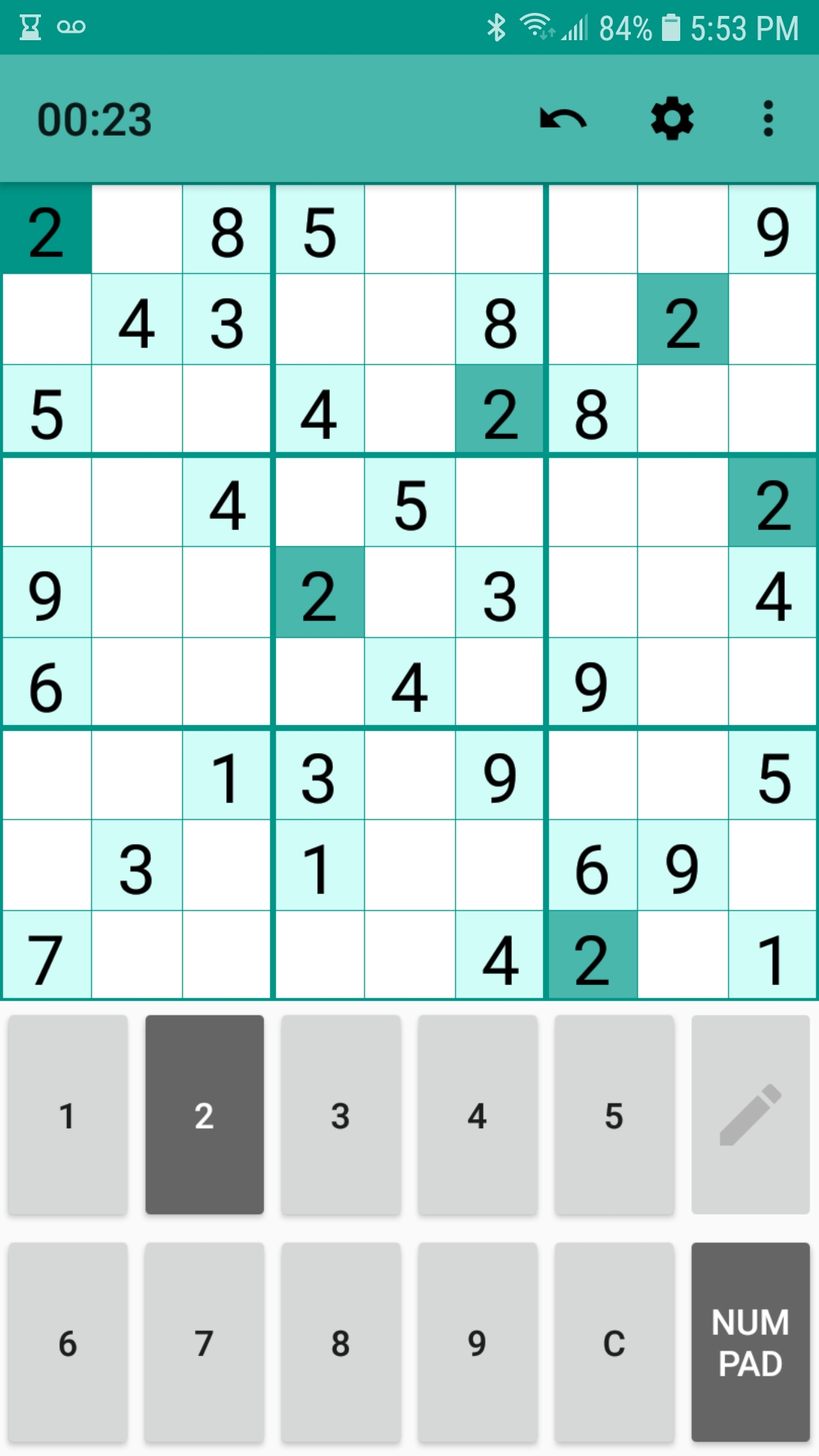 This version you have a few options for inputing numbers. This view is what I refer to as a systematically entering of numbers. You chose which number you want to enter (in this shot I choose the number 2), it then highlights all the '2's on the board (just like yours does), but then you click on the board and it enters a 2 into that space for you. Problem with this design, they require you to select a 'Clear' (the 'C' button) to delete a number on the board. Why can't we delete the number if a '2' is already there? I found this to be the best input format for non keyboarded systems.

Gnome-Sudoku uses a Pop-up keyboard system for entry. Click on the blank board space and a miniature number pad keyboard will pop up on the screen where you need to click on the number you want. VERY ANNOYING! I am a HUGE fan of click counting! Less clicking the better.


Did you try expanding the program?

Yes and it worked wonderfully! The font even increased properly with the size of the board.

1/. You can turn the various switches off to stop the 'helpful displays'. Or am I missing the point?

OH! For some reason I thought that was for the help/about window.

Yes this would take some extra logic.

3/. Can you point me to any examples of this feature? Here's an example of Open Sudoku with all notes filled in. Often players will fill in all possible numbers in each square so they can solve harder puzzles. For example, in this screen cap the first row, second column we find that 1 is the only number that fits there. So we can enter it in. In Open Sudoku they have a function where they can automatically fill in all notes like you see here. To me that's a bit of cheating. But they also allow players to add what ever numbers they want as notes in each square (operated by toggling the pencil button first). That is useful.
Now I figure notes would be a fairly large addition to game and may take significant rewriting. So I would place it as a long term goal.

Thanks again for you input. Watch this space.....
Top

Here is the latest update.

New features include: - I'm still working on other items.... 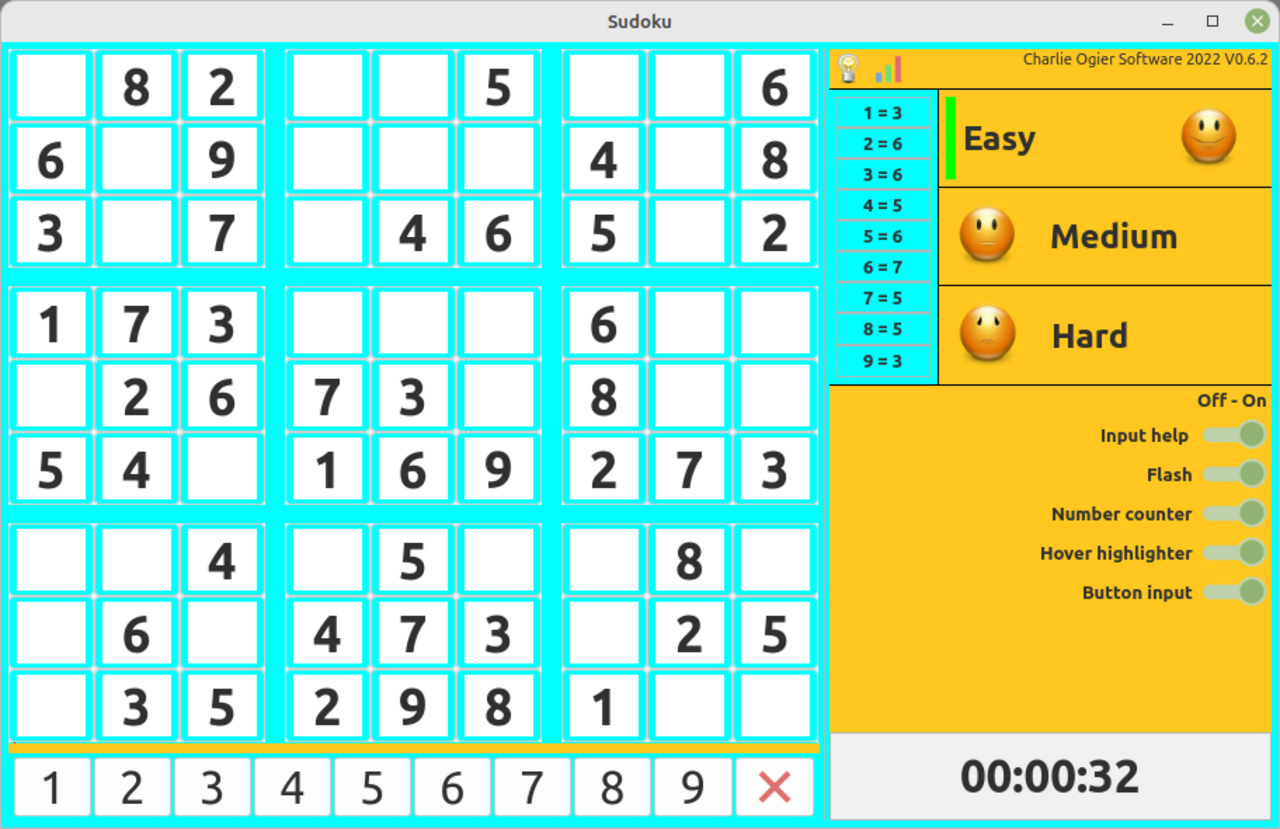 So far I've liked the new features. And Mmmmmm stats!

Speaking of which, the ToolButtonStats has the wrong ToolTip info on it.

So far it flows nicely. Simple intuitive interface. I'm going to try a few more games with different features on and off see if I find anything else.

Oh and one odd thing I noticed (or at least I think I noticed), I won a game in easy, then switched to medium and I think I had the same basic game just less starting numbers. Not sure what happened. I haven't looked into your new game code.

Edit: Yep I was able to repeat a game by switching levels after winning.
Top

Thanks again for the input.


Speaking of which, the ToolButtonStats has the wrong ToolTip info on it.


Edit: Yep I was able to repeat a game by switching levels after winning.

Now it didn't do it. I don't know. Maybe I'll have to watch it a bit more. I know this puzzle I just played had two possible solutions when I got to the very end so I don't know if it has something to do with that. Aka: found a solution but not the one it was expecting or this time found a solution and it was the one it was expecting. I'll try turning on Input Help just before I finish my next puzzle and see what it has to say.
Top

Not sure how to post a video here so here's a link to a video cap of completing the game but causing the repeat game error:

And here I had the option of placing the final two 6's and final two 2's in two different ways to produce proper solutions. Using the Input Help toggle, I opted to place them in 'incorrect' locations. Then closing off the stats window and clicking on Medium level I got the same game, just different starting hint numbers.

(I think I just need a different video format to upload to get video to work. I see the video tags now, but MKV does not work.)
Top
Post Reply
12 posts