PJBlack wrote: ↑
Sunday 31st January 2021 1:46pm
works great if run from gambas...but compiled into a directory outside the project it says file not found...

Yes you are right. I just have a desktop launcher that runs the last executable, in my case: /home/steve/Gambas/HelpBrowser/HelpBrowser.gambas

You could run the Packager and include the .csv and .png files and it should work anywhere.

However, I'm still not sure if I'm wasting my time with the Control Locator. Its a lot of work editing screen-shots, adding a red blob, saving the png and adding details to the csv file. I don't use Gambas enough to be able to remember what all the Control Icons mean, or even where they are, so that was my incentive for trying this idea.

I'd probably be happier with a drop-down list of Controls directly in the IDE, rather than clusters of icons with vague tab titles, as it is at the moment.

stevedee wrote: ↑
Sunday 31st January 2021 2:24pm
I don't use Gambas enough to be able to remember what all the Control Icons mean, or even where they are

i'm using gambas every day and don't remember all of the controls and for sure not in which component they located ... for me not a problem just lost time but i think for a new gambas programmer it's annoying ... compared to lets say lazarus/fpascal every control is in the ide without loading components so it's in fact a gambas problem but documentation is not in the focus of the developer ... they even don't have heard about

if you say that it's to much work you should stop because the point you've reached is yet VERY helpfull !

as i said before ... i start helper before gb and i use it a lot ... the control finder is helpfull enough in that stage ... so what

can't thank you enough for that simple but genius idea and realization !

by cage
Great work Stevedee. I think that this program is the best one that you have created. Like PjBlack It's my go to program when ever I am programming.

by stevedee
This is probably my last update.

I've now added the ability to save bookmarks...

...made a few other changes and updated the Basic Guide. 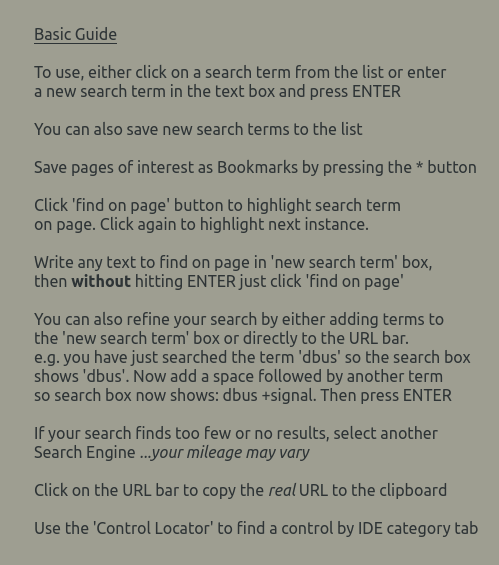 My Little Gambas Helper - an explanation

by stevedee
Just a few points to clarify how My Little Gambas Helper does and does not work.

My Little Gambas Helper does not scrape or download large amounts of data from any website for local use.

When you click on one of these links, My Little Gambas Helper displays the appropriate web page, just as it would if you were doing a manual search directly in a web browser.

The primary benefit of my program is that it speeds up searches as you don't have to wade through irrelevant links, including adverts, as searches are targeted at a single website. You can also easily set Bookmarks to return directly to [often complex] subjects of interest.
All times are UTC
Page 2 of 2