clearly I am doing something wrong for creating installation files for debian on my fedora machine. What am I doing wrong?

when my computer boots up i get a grub menu that gives me a choice of about 14 different os's to boot into for my testing needs.
Variants of Mint, ubuntu, debian, manjaro, mandriva, mageia,
To be honest 14 is kinda excessive if update-grub gets run it takes ages lol

the reason I use a VM is so I can do a snapshot and easily in just minutes revert it back to a clean state without complete reinstall. Not to mention that dual booting is a pain in the ass. I keep the VM's so I can test clean installs so partitions are just not going to cut it.
Top

sadams54 wrote: ↑
Wednesday 08th September 2021 6:51pm
...What I am meaning about debian is that it can't resolve the dependancy of Gambas3-runtime version 3.15 or higher. I also can't install the runtime manually as gambas3-runtime is not found in the debian repositories. I am wondering if they exist for Debian 11 or is there another repository I need to install to get to gambas runtime

If I'm reading this right, this page: https://packages.debian.org/source/bull ... el/gambas3
seems to indicate that Gambas runtime interpreter is included for Gambas3 v3.15.2 on Debian 11/Bullseye

So are you saying that this is not the case? Maybe double check that you are looking at the right repository.

correct, I am saying it is not the case. when I do apt-get install gambas3-runtime the software is not found by debian. Keep in mind I am not a debian guy. I am fedora so when it comes to repos for debian I am lost. if something is missing like a repo please tell me how to fix.
Top

Well, a quick look through the debian 15.2 packages themselves (from that link you provided) reveals that the runtime is only packaged for the mipsel architecture. In fact, having a geezer at other Gambas3 packages it looks like they were put together by a "committee". Some for this architecture and some for that.
I recall now that a bulletin board "helper" said to me recently that he was damned if he knew or understood how debian decides to package some things. Now I see what he meant.
You will have to contact debian and get them to build an arm64 package (if that's your architecture).

What I am about to tell you is absolutely top secret and you should not show it to any one else!

The Gambas packager assumes that you have installed Gambas from a packaged origin i.e. as binaries from some distro or other. However, not all distros package Gambas in the structure recommended in the wiki. Well I mean, why should they, after all they know better, don't they.

Your problem is one example of the results of their "better" approach.

(Back to Gambas) It is, of course, impossible for us to guess what package structure a particular distro decides to use for such and such a version of Gambas. All we can do is code for the recommended structure. So, the package builder and in particular I will talk of the Gambas package builder for Debian, includes requires lists. There are two lists, one for building the package (i.e. the current system you are building on) and one included in the package (and by "in" I mean "inside") that is for the target system.
(From memory, RPM "spec" based builds are the same.)

The upshot of these two lists are that You should not need the debian runtime package to be installed on your build machine in order to build debian packages via the IDE packaging faculty. If you do so need, then we have a bug.

Sshhhhh! IMO you should also not need the "packages" for the build machine distro installed on the build machine. BruceS knows this fully well. Further, there is a way around it. But it is secret because someone, possibly with the initials BM, would probably nuke South Australia if he found that I was suggesting this.
To build debian packages so there are no "requires" dependencies takes only a very small modification or two of the IDE itself. In the Package module (in the Packager tree) there are several calls to GetDependencies() from the MakeDebPackage() method. By replacing those calls with a null-string literal you wont generate the dependencies in the builder list or the target list. Et voila! Packages build. BUT if you do go down this road, don't ask for support from the Gambas development team and finally:
Now you have read this I'm afraid that I have to kill you.
Top

THis is the result when I try to manually install the gambas3-runtime... 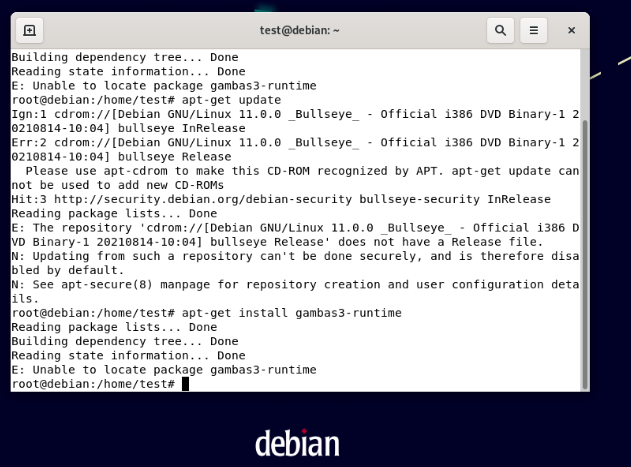 if this is a debian issue I understand. but I want to make sure it is not something I am not doing. If it is I want to learn what my mistake is.
Top

looks like you only have the security debian repository set up , you need main and contrib too.
This happens when you choose not to select a network mirror at install

Using a repository is fairly simple: For the official Debian repository open /etc/apt/sources.list, insert the line

ps. you can use apt-cache to find what gambas3 packages are available from your configured repositories.

BruceSteers wrote: ↑
Wednesday 15th September 2021 3:21am
looks like you only have the security debian repository set up , you need main and contrib too.
This happens when you choose not to select a network mirror at install

Using a repository is fairly simple: For the official Debian repository open /etc/apt/sources.list, insert the line

thank you. That was what I was looking for. also looks like the pathing was not set in the debian install. You helped me figure out the problems. Seems debian does not install as well as others but now I know how to fix so thank you and it works on debian.