I'm sorry, but I keep asking for documentation. Isn't any? Any at all?
Top

Cancel that. I must not have had enough coffee today. I found the first page of this group and it appears to be all the documentation I could need right now.
Top

There's lots of doc's books out there.
If you've used microsoft visual basic or .net it's quite similar (but less complicated)
Are you completely new to coding ?

There's the gambas wiki, this is our online reference manual but has a lot of examples...
http://gambaswiki.org/wiki

Caption is a synonym the .Text property, you'll find text in the list of properties.

Glad you found some docs

I tried many other languages/programming environments , can't get my head around any of them lol
I'd had experience with visual basic and .net on microsoft though.
Gambas is simple in comparison , and once you get used to using the IDE you'll find it very intuitive and full of very handy features that other IDE's lack.

If you're new to coding though it will take a little time to get your head around it, i mean it's not rocket science but it's not super simple either.
Best way to get into programming I've always said is to think of it as gaming, a new kind of game that has challenges and puzzles and might take some head scratching and even some research/help , but ultimately , at the end of the game , you have your very own software

Basic is a very high level language , the higher the level a language is the closer it is to just talking, the lowest level language being coding in binary 0's and 1's , but basic is pretty up there with being an easy one

It's gonna be a bit of trial and error though , it is for us all

Hi DFergFLA, I am glad you are still with us. To get help in the IDE you can use several methods: -

Try right-clicking on an item in the toolbox.
There is help available above the Toolbox, If you can't see anything you should be able to see 2 small ^ that if clicked on will open the help window, see images below.
Press F1 for general help.
Press F2 for specific help on a command. 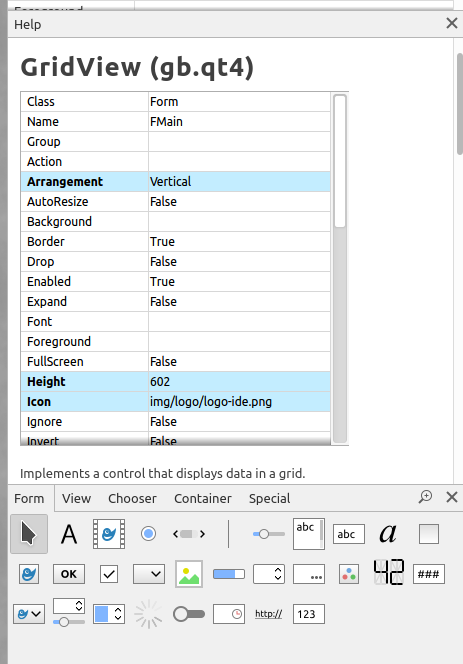 I hope you have found the Gambas Farm as there are plenty of examples there, if not you can also see the Farm on Gambas.One here.

There are a couple of books on Gambas.One as well here and here.

Have a look through the "Did you know?" section of the Forum which is pinned at the top of the General area here. There is a wealth of information there from users.
Top

You might like to know that I have just installed Ubuntu 20.10 beta and Gambas 3.15.2 installed correctly from the Ubuntu repository (ppa not used).
Top

The slackers at debian are still on 3.12

If at first you don't succeed , try it differently.
Top
Post Reply
18 posts